I’ve always been interested in the process of recording music, so when Neil mentioned Musiclab was running a two-session recording studio workshop at his new venture, Farm Factory Studios in Welwyn, I leapt at the chance.

When fellow Musiclab student Steve and I turned up for the first of our sessions we couldn’t decide what was making us more nervous - the banks of studio equipment (which wouldn’t look out of place in the cockpit of a commercial airliner), or the thought that it would shortly be recording our (slightly amateurish) playing. Farm Factory’s engineer, Dave, did a great job of easing our tension as he explained the difference between direct injection vs microphones, the importance of mic selection and placement, and walked us through the mechanics of wiring them to the boxes in the booth and balancing the input levels. 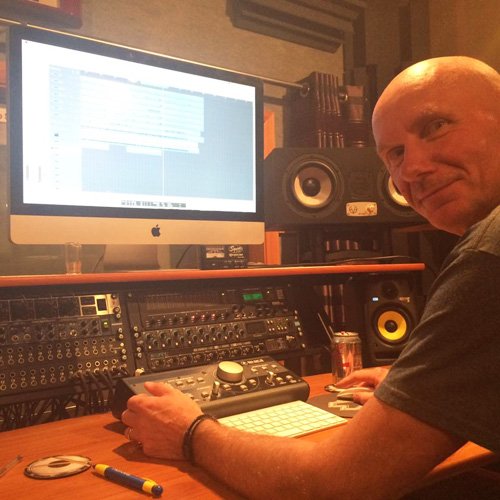 Once set up, Steve and I jammed a little (me on drums, he on bass) and we walked round to the studio to listen to our efforts. Dave showed us how the tracks from each mic can be individually processed (‘mixed’), using the huge array of studio tools to tailor the sound to your exact requirements; and any little (or large) glitches in your playing can be evened out or removed through editing. While we played around with these, Dave talked a little about band recording, and it became apparent that an engineer’s role is as much about encouraging great performances from the human beings playing the instruments as it is about running the machines that record them.

To our surprise, after a bit of mixing, a vaguely presentable sound began to emerge from the monitors. As our first day drew to a close, Steve and I resolved to both choose and rehearse a track for next week’s session proper…

One week later, as we arrived for our second session, our initial apprehension was gone. In its place was a rueful acknowledgement that we had failed to either choose or rehearse anything.

‘Just jam for a bit’ came Dave’s voice through the headphones, so we did – a basic rock/blues rhythm. (If you can’t be flash, at least be accurate, I thought). After a couple of minutes we came to an (almost-planned) halt, and with the traditional studio musician’s cry of ‘Is that enough?’ I decided it was a wrap. We felt both sympathy and admiration for the musicians of old, who only had one or two shots to get it right, with only a couple of overhead mics to record it. 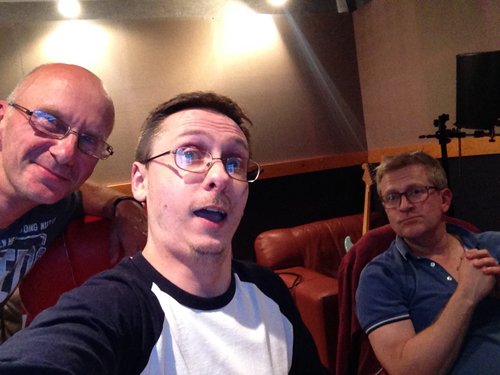 Once in the studio we edited Steve’s bass track a little, splicing multiple tracks together to get the best of each, before we were happy with our ‘backbone’.  Next came guitar – an initial guide track was overdubbed with some more showy riffs (courtesy of Dave – also an expert guitarist).  Some tentative harmonica from me and some percussion from Steve – cowbell, tambourine and shaker (actually a half-full coffee jar, but it sounded good) – and we were ready to start mixing..

Mixing is two things: great fun; and – probably because it’s great fun – very difficult to stop.  Gradually, before our eyes (ears?), Dave’s studio sorcery began to work.  The individual tracks started to blend in with one another, and a coherent sound began to emerge.  We eventually managed to tear ourselves away from the console and start mastering – balancing the instrument levels against each other and applying a final EQ, until we were happy with the final product.  We ended up with a much better idea of what goes on in a commercial studio and a copy of our track (provisionally titled ‘Workshop Blues’) on a CD.

If you’re interested in home recording and want a crash course in the studio process, or you’re a band considering getting into the studio for the first time and want to know what happens the other side of the glass, or even if, like me, you’re just curious about how it all works, then I’d heartily recommend this course.

As for our track, it’s no hit record but for a pair of musicians with little experience of playing live, or with each other, we’re pretty pleased with it. All it needs is a vocals…some overdubbed tom fills…some violin…and synthesisers…and maybe a horn section?

Note from Neil: I think that Workshop Blues sounds like a slowed-down Ramones track - just missing some nasal vocals!