When talking about snare drums there are two different drum specifications to take into account. These are both measured in inches. These are:

Shell diameter, which is how far across the drum head stretches at its widest point and Shell depth which is how deep the wood of the drum is.

Snare drums that come as part of sets with drums are generally 14" in diameter and 5" deep.

They are the most common size because of their versatile nature, easily managing deep and higher pitched sounds.

But there is a large variety of different snare sizes to be aware of.

Deeper drums produce deeper sounds, that's why bass drums are so much deeper than anything else, the range of depths consists of three basic sizes.

There are quite a few different diameters to take into account too, the most common of these groups are: 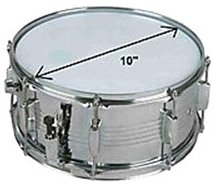 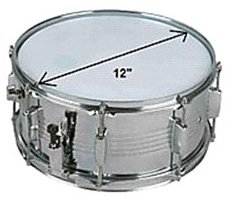 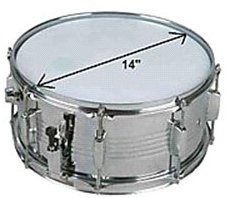 The smaller diameter snares have a higher pitched attack and "popping" sound, where as the snares with the larger diameter have a fuller fatter sound that has less treble in it.

Simply put, there are two standard materials used: wood & metal. Wood is generally warmer in tone than metal. Maple tends to be the most popular wood used for snares. The sound of maple is described as warm or dark. Woods of other densities will results in tones that may be either brighter and higher pitched or darker and lower pitched.

Steel is the most common metal used for snares but brass, copper, aluminium, and bronze models can also be found.

Some drum companies have even made snares that use a maple shell in the centre and a heavy-gauge brass on the outer edges. This snare makes a lot of sense given that maple is warm and metal is bright. So the tones produced will naturally complement each other.

Naturally the overall sound that any given snare will create will depend on several things. The type of material the snare is made from, the depth and diameter of the shell and the tuning of the drum heads.

Because a deep and wide snare made of oak will have a deep dark tone to its shell, that snare may not perform as well when the heads are tuned to higher pitches, as say a brass piccolo snare would.

For this reason the tuning behind a snare is important, for some older styles of rock and pop might require a lower pitched deep sounding muffled snare, which would require quite a low tension on the heads and loose snare strands. Whereas more modern styles of Hip Hop, Pop and Metal would require higher pitches, with tighter drum head tuning and taught snare wires. It is important that a snare tuning is relative to the type of music you are playing, for instance a lot of metal music contains many deep sounds so a higher pitched snare is used to cut through the mix.

drums snare snare drum
Drumming & Maths
The value and benefits of learning and playing an instrument
A Drummer's Story: Realising A Dream!!
Comments